How to Help a Fearful Dog Gain Confidence

Share on facebook
Share on google
Share on twitter
Share on linkedin
Being a parent to a fearful dog can be a frustrating and overwhelming experience. It would be difficult for you to entertain guests without aggravating your pet, and trips to the vet can prove to be a real chore. 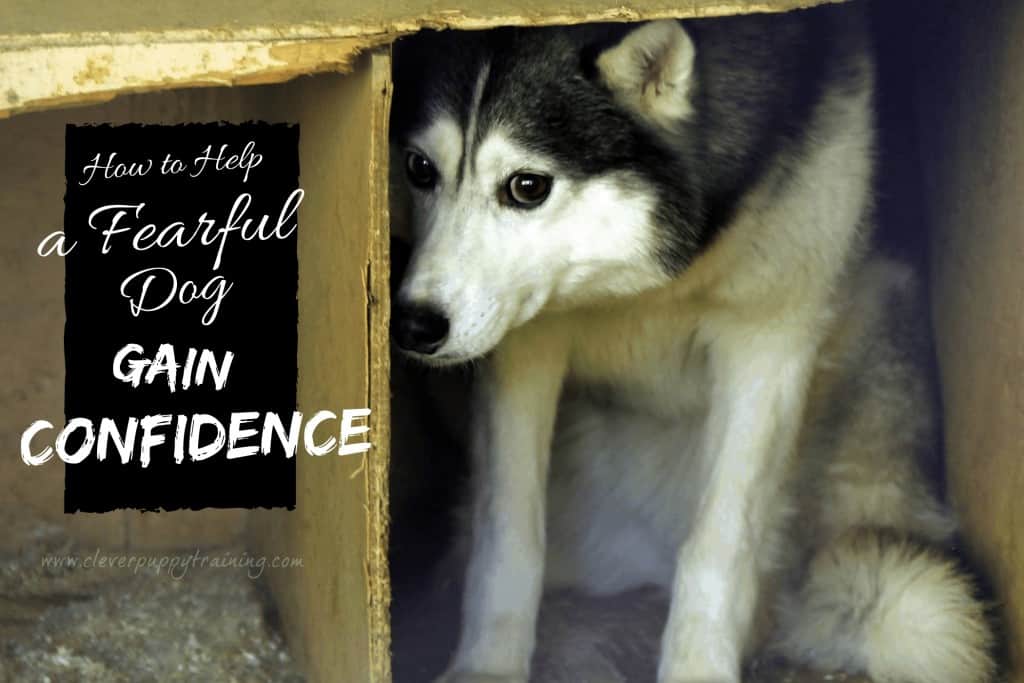 Being a parent to a fearful dog can be a frustrating and overwhelming experience. It would be difficult for you to entertain guests without aggravating your pet, and trips to the vet can prove to be a real chore. Not only that; it can be heartbreaking to see your buddy unable to relax even at home. That is why it is important for any responsible pet owner to be able to condition their dog to be less agitated.

In this article, we will discuss the factors that can lead dogs to be fearful and anxious. We will also give an overview of some of the most effective techniques to manage fear in dogs.

Fear is a reasonable response for all animals when they face with impending danger. But if your dog is just generally frightened without apparent reason, you as a pet owner should intervene and help your fearful dog. This it easier for pet owners and people around them; but most importantly, it helps improve the life of the dog.

It is important to understand that there are a variety of reasons why a dog becomes frightened or restless. First is the dog’s genetic predisposition to fear and aggravation. If either of the dog’s parents has nervous tendencies, more likely than not the offspring would suffer from the same condition. In such cases, the fear is probably never going to disappear completely, but instead can be managed and conditioned.

Certain dog breeds are also known to be more likely to be anxious. For instance, Border Collies, while very friendly and fun to be with can be downright destructive when left alone due to separation anxiety. The same can be said of German Shepherds and Labradors. Knowing this, owners can take steps to relieve the dogs of their fears.

Another factor that contributes to a dog’s fearfulness is its early socialization. If you have puppies, it is important that at an early age they get used to having people around. At eight months, puppies are often starting to become shy and more wary of strangers, so it is best to condition them earlier. Puppies at that age tend to attack children and, if left unattended, can only worsen over time.

Unfortunately for some dogs, their fearfulness is a result of some abuse or trauma. Just like humans, dogs can also develop Post-Traumatic Stress Disorder or PTSD. This PTSD can happen after natural disasters, the loss of a caretaker or fellow pet, an accident, or physical and emotional abuse. These fearful dogs often act out by peeing or pooping where they aren’t supposed to, howling or barking, or other kinds of destructive behavior.

How to Help Them Remove Their Fearfulness

Knowing all the contributing factors to fear and aggression, a pet owner, can find ways to condition their dogs to become good protection and companion dogs.

For fearful dogs that are predisposed to anxious or fearful behavior, pet owners might not be able to completely remove the fear. But, pet owners can make it more manageable by allocating time to be with their pets to reassure them. For dogs with separation anxiety, it’s important that they feel that their owners won’t leave them alone for a long time.

For puppies below eight months of age, it is a crucial time to expose the puppy to a variety of people and places. Show your dog to your family, friends, and other people they are likely to encounter on a regular basis. The same goes for places; bring your puppy around places like the vet, the park, around the neighborhood, gas stations, and other places they would see often. During this time, make sure that the puppy is safe and keep the exposure as pleasant as possible for your dog.

For older dogs who haven’t gotten the early socialization, they may pose a few problems. While it is possible to rehabilitate older dogs, they can’t be expected to adjust as well as well-socialized dogs. Fortunately, the process of rehabilitation isn’t that difficult. Similar to early socialization, it involves safely exposing the dog to different environmental stimuli to get the dog used to them.

In the case of dogs which have developed phobias, pet owners may feel tempted to comfort them. In fact, this may not be the best approach, because you would only be rewarding the fearful response instead of removing it. The key is to show the dog that the trigger of the phobia isn’t dangerous to them. This can be done through safe and gradual exposure to the thing that is causing the fear response. Even simply ignoring the fearfulness can work in cases like this.

For more severe cases of anxiety and post-traumatic stress disorders, the treatment can be similar to distress management in humans. Veterinary pharmaceuticals can be used to help calm down the dog in conjunction with conditioning techniques for more long-term results.

One type of behavioral treatment that works well for dogs with PTSD is systemic desensitization, which gradually exposes the dog to its fear (for instance, in smaller “doses”). Daily exercise and allotted time for play and training are also helpful in dealing with PTSD. While the treatment can take several weeks or months, the effects can be advantageous for both the dogs and the owners.

Fearfulness in dogs can be caused by a variety of factors, including genetics, socialization, and traumatic or fearful experiences. Some dogs are more likely to exhibit fear and anxiety, and there is a critical period in a puppy’s life to condition them to socialize with people. Given this, it is possible to rehabilitate the dogs with patience and behavioral techniques.

Dogs can also suffer from PTSD and learned fear responses, which can be removed with medications and systemic desensitization. With patience, love, as well as knowledge on conditioning and behaviors, dog owners can help their pets become well-adapted, sociable, and reliable companions for many years to come.